COVID-19 Update: Our family and team remain ready to serve you 24/7.
View our "Stay at Home Arrangement Helper"

Let Us Show You How

Choices to Honor Every Life

Prices to Meet Every Budget

We Guide You Through Every Step of The Way

Here's How We Are Different

Many families choose our own Jenkins Cemetery (formerly known as Startown Cemetery), conveniently located behind Jenkins Funeral Home. It began as a Community Cemetery in the 1800s and was taken over by Startown Baptist Church in the late 1940s and early 1950s.  Jenkins expanded the cemetery in 2004 and has added special sections, such as the Green Burial Section and the "Garden of Angels" for infants.

Today, the Jenkins Cemetery is exclusive for Jenkins Funeral Home families only. It is privately owned by our funeral home and spaces are available for purchase by families desiring to use our funeral services. (If anyone should have a claim on any space in Jenkins Cemetery, they are asked to contact our office.)

A copy of the Jenkins Cemetery Rules and Regulations is available by visiting our office.

Interesting Trivia at Our Cemetery

Seven Wilson family members whom fought in the Civil War were never properly recognized with headstones. The U.S. Government provided these stones and they were erected in our cemetery one hot summer day in 2006 by the local camp of the Sons of Confederate Veterans.

WILSON, DAVID,Private,Company K, 46th Regiment, NC Troops - Born in Catawba County* where he resided as a farmer prior to enlisting in Catawba County at age 28, March 20, 1862. Present or accounted for until killed at Bristoe Station, Virginia, October 14, 1863. [NCT-11:239]

WILSON, JOSEPH H., Private, Company A, 12th Regiment, NC Troops - Resided in Catawba County and was by occupation a railroad conductor prior to enlisting in Catawba County at age 27, April 27, 1861. Present or accounted for until wounded at Malvern Hill, Virginia, July 1, 1862. Died at home in Catawba County on or about October 13, 1862, of wounds. [NCT-5:130]

WILSON, MATTHEW M., Sergeant, Company K, 46th Regiment, NC Troops - Born in Catawba County where he resided as a student prior to enlisting in Catawba County at age 18, March 13, 1862. Mustered in as Sergeant. Present or accounted for until he died in hospital at Richmond, Virginia, on or about December 12, 1862, of "pneumonia." [NCT-11:239]

WILSON, THOMAS W., Captain, Company C, 28nd Regiment, NC Troops - Resided in Catawba or Cleveland counties and enlisted in Catawba County at age 26,June 6, 1861. Mustered in as Private and was detailed as Commissary Sergeant on October 24, 1861. Elected 2nd Lieutenant on or about April 16, 1862. Present or accounted for until captured in Maryland in September, 1862. Paroled at Baltimore, Maryland, and transferred to Aiken's Landing, James River, Virginia, where he was received October 12, 1862, for exchange. Returned to duty on an unspecified date and was promoted to 1st Lieutenant on November 3, 1862. Reported on duty as acting Captain of Company H of this regiment in January-February, 1864. Returned to duty with this company and was promoted to Captain to rank from May 6, 1864. Killed at Spotsylvania Court House, Virginia, May 10, 1864. [NCT-7:195]

ca. 1833 - 10 May 1864
PARENTS: Thomas and Rebecca Wilson of Cleveland County.
(Thomas came from a family which included three sets of twins.)

17 Feb 1838 - 3 Jul 1863
PARENTS: Nathaniel and Mary C. (Templeton) Wilson
Nathaniel Wilson, noted state and local legislator was the founder of
Catawba County. He was murdered in 1852 by his son-in-law, Wilson England.

Newton Wilson was the individual for whom the city of Newton was named.

THE EFFORTS REQUIRED TO MAKE THE CEREMONY A REALITY:

THE FRUITION OF THE LABORS RESULT IN A FITTING TRIBUTE:

"Jenkins Funeral Home was instrumental in making this dedication ceremony a reality. In addition, Carl worked alongside of SCV members preparing the site for the stones. When he could have simply have given his blessing to our project, he gave up an entire day working with camp members. On the day of the ceremony, he supplied tents and chairs to make the ceremony an unqualified success. The Wilson family and the SCV owe Carl Jenkins and his family and business a sincere debt of gratitude," says Derick Hartshorn.

Many brave soldiers of the Confederacy have been ignored, in spite of their ultimate sacrifice. Most memorials to them are necessarily of a private nature due to the political shroud that sullies the memory of these brave Confederate soldiers.

On behalf of the descendants of the bravest of the brave, we make no excuses for their uncommon valor and how they fought to protect their homeland. Time and politics may fade but the truth of heroism will never die. Of those who marched off to war, a full one-third never returned alive.

We seek to help those who want to memorialize their Confederate ancestors.
We, like they, have not forgotten these brave men and will be there to remember them. 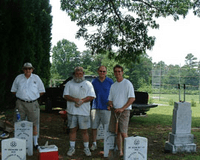 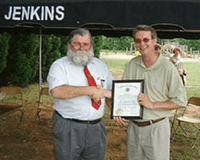 Jenkins receives certificate for his efforts

No matter your cemetery choice,
we can meet your needs..

We can arrange to transport and conduct services at any National or Veterans Cemetery.  Click here to learn more.

Our Facility
Our Cemetery
Directions

A year of daily grief support

Our support in your time of need does not end after the funeral services.  Enter your email below to receive a grief support message from us each day for a year.  You can unsubscribe at any time.